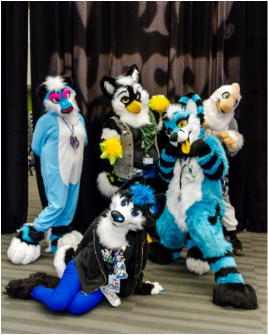 Myrtle's Monsters got its start in the fall of 2012 after the founder, Myrtle Monster, started building her first fursuit.  This process began that January when she attended her first convention, Further Confusion.  This sparked the need to create a suit of her own, and after months and months of research, she began to create.  Things got a quick start right after that, at Further Confusion 2013 her first two suits were debuted, Myrtle the Batman Dragon and Husky Dent, the two-faced Husky.
Since then, Myrtle has continued to bring characters to life.